I sketched some scenes from Birdy Decode and Casshan Ova frame by frame in an awesome homebrew program for the ds, Animanitee. So the animation I did has the same amount of frames of the original animation at least as best as I can tell by advancing frame by frame. It's a really fun excersice, the shapes and drawings that animators to come up with to get the right feel for movement, power etc, is pretty amazing.
Posted by Paul Harmon at 11:43 AM No comments:

Let's talk about Video Games
I posted this on Shacknews,then on 1up. they were talking about shooter fatigue. Almost every major game involves shooting as your primary interaction. I'm tired of shooting but I'm also tired of every AAA title simply trying to look realistic. Wouldn't it be amazing to see something like Mass effect with characters and environments that looked like your favorite comic artist/illustrator/ character designer?

An easy example of what I'm talking. Street fighter third strike looks amazing, it looks like those fantastic Capcom artist's style. I really wish Street Fighter 4 and Marvel vs Capcom 3 looked more like 3rd strike come to life in 3-D. I want to see those awesome desginer drawings lift right off the page into glorious 3D, that didn't happen, It would be fantastic if it did or even better there was a whole action adventure with stylized characters as appealing as capcom's artwork has always been. Now hoepfully you see why I am sad, and also why I still think Windwaker is one of the most visually impressive games. We don't have to make our games as stylized as that especially if we're talking about red dead, uncharted, mass effect and the like but to me all those games characters would have benefitted from some stylization. anyway here's what I wrote:

Anyhow listening to Ryan's comment about shooter fatigue, and maybe combat fatigue got me thinking about a lot that bugs me with games now. I'm a professional storyboard artist for tv animation, I do some personal comic work when I can and my perspective on games is really shaped by my tastes as an artist. I love animation, comics and film but for most of those mediums I'm primarily into classics and older stuff not what's happening now. So games have become in a way my replacement for a lot of those loves. Ok on to the point.

I completely agree with shooter fatigue, and I think it's really ties into my problem, Realistic visual fatigue. It bugs me that these machines are so powerful, can create fully realized worlds but every major story driven AAA title only wants to look as realistic as possible and also usually includes the same kind of shooting combat. For lack of better examples it seems strange that we don't have an awesome game that does something along the line of a Nightmare Before Christmas, or maybe even a slightly more realistic Incredibles or something like the world and characters of AKIRA, fully realized and brought to life in a gameworld. I'm tired of the creepy mannequins and simply running down corridors and shooting. I'm finally playing Mass Effect since it's come to ps3 and there's some awesome stuff but I REALLY hope there's another type action to do besides the nonstop monotonous shooting. That's what really kept me from getting into Bioshock, the redundant combat/shooting was too much. I think that's one of the great strengths of SHadow of the Colussus, the combats and encounters feel detailed and complex enough so you truly get a better sense of immersion. I know a lot of people hate "boss" fights but I think they are there because games haven't quite found the way to get in really close and let your character struggle with another character and actually give you control and have your character interact with environments or whatever the case maybe. The boss fight seems to try and give you that. I think I've gotten off subject but it would be great if enemy encounters could get to a point where they are almost as complex as a Street Fighter match, but still seemlessly fits into the games environment. I know most of what I'm talking about is still combat related but I think it's the characters interactive shortcomings that really help turn everything into a shooter. How awesome would a new Ducktales game be if your character could go anywhere in Duckburg, travel the world and really interact with characters and environments and in a complex and sophisticated way. sorry that was way too long
Posted by Paul Harmon at 11:43 AM 1 comment: 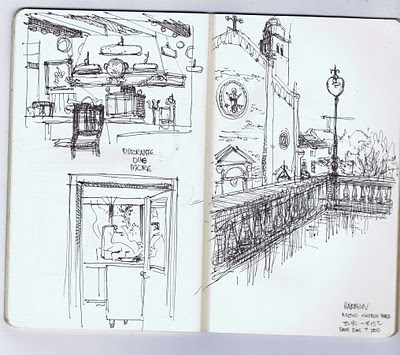 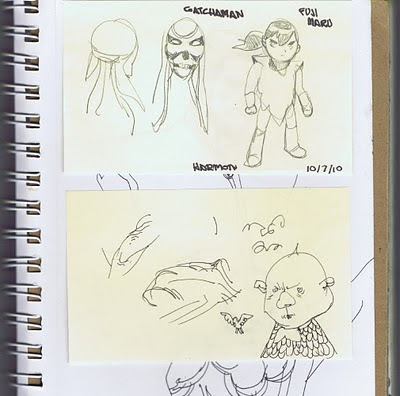 top are pretty much the only location sketches I did on a recent trip to Italy. Those were done in a really cool small town called Asolo.
Then below that a few cool Japanese characters. Fuji Maru, a character that I mostly know from the cool advertising figures, statues made based on the very old anime based on a manga. Next to him was a very stange looking enemy from one of the early episodes of gatchaman. a really freaky looking character, really cool design. then below them some little creaturey dude I made up.
Posted by Paul Harmon at 3:21 PM 1 comment: 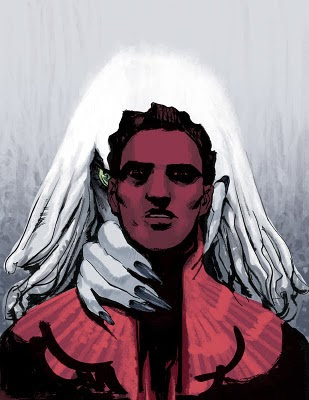 From the upcoming Titmouse Mook vol 2.
Textless title page for the second installment to Harvest
Posted by Paul Harmon at 10:17 AM 2 comments: 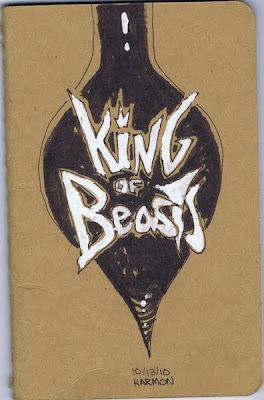 to carry around and jot down any new story ideas characters etc
Posted by Paul Harmon at 9:52 AM No comments: